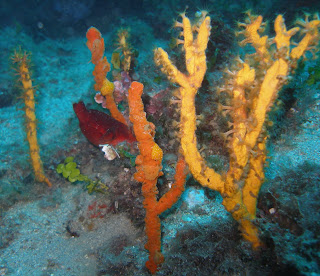 The Eastern side of the Mediterranean, never seems to stop suprising us with its beauty!
Phyllidia flava is the only representative of the Phylidias, in the Med,
and here we have two specimens (yellow blob) on the two orange shponges, after they have layed their, not so perfect as usual, egg mases.
Phyllidias do not have radular teeth so these slugs eat the sponge by exuding enzymes and sucking the animal off the sceleton.
This photo was taken at 35 meters in Pilio.
by Elina Samara στις 10:02 No comments:

Me and my flatmates! 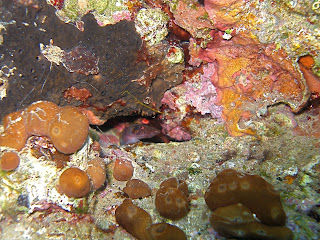 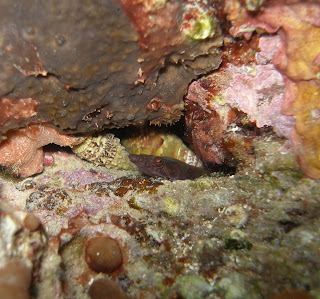 At two meters depth this little clingfish was quite curious looking at me, he even raised his head to see me! And of course he can because this species has the ability to "raise his head", a special adaptation of the vertebrae, allows him to do this.
The funkiest part of this fish is the sucking disk on his belly,formed by the ventral fins (visible from the side of the first picture). This specimen is a male because he has red spots on the head and along the base of the dorsal fin.
First time I saw him he was alone in his penthouse, second time and every time after that he had two gastropod room mates with him...
too cool too be alone ;)
Photo from Pilio
by Elina Samara στις 00:22 No comments:

A sponge that eats rocks? 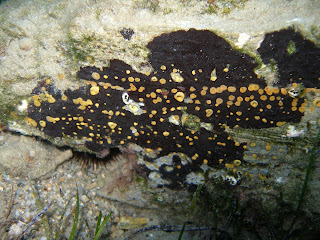 Chemical warfare is the most brutal and can be used by very fragile species in the sea in order to defeat the strongest!
This boring yellow sponge uses a chemical acid by product from its respiration to make holes in soft limestone rock, to undercut and surround tiny pieces of rock, which are then spat out with the water flow. In many instances, most of the sponge is hidden in a network of passages and chambers that it has excavated in the substrate, which can be rock or shells. In some instances it can be visible outside the rock in very obvious masses.
This particular specimen is surrounded by a colony of black bryozoa, Reptadeonella violacea .
I have seen the sponge in red as well, but am not sure if it is the same species.
by Elina Samara στις 02:42 No comments: 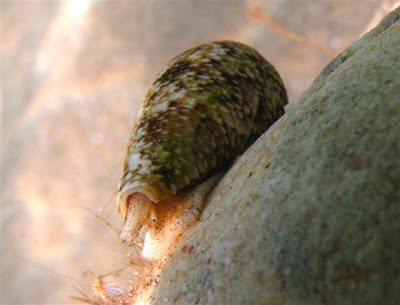 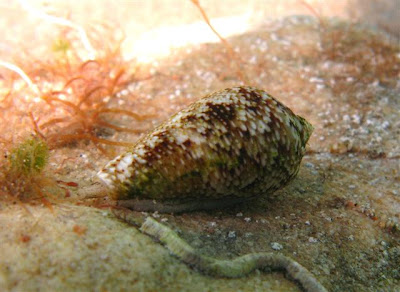 Conus mediterraneus is far away from his family. He belongs to a great family of snails with more than 400 species. Unfortunately he is the only specie of the family Conidae at the Mediterranean sea. Once at 1986 a cousin of him C.fumigatus visit him from the Red sea that he lived but he didn't stay for a lot. So C.mediterraneus continues his life by hunting polychaetes and other animals with his venomous harpoon!!! You can find him at shallow water hanging around with a lazy style.
Photos from Kolimpithres beach Paros.
Conus ventricosus is a synonym.
by Hector Giourgis στις 02:02 1 comment:

I don't know how it happens, but the crappiest, cloudiest days are the best for underwater observation!
-This species of Melibe fimbriata was encountered at 10 meters free swimming and then attached on the sea grass, however the other time I encountered a much larger specimen, it was wallowing in the mud!
-The identification is hard as not many studies have been done in the Med, so until now most recordings are labeled as Melibe fimbriata
-It's a remarkable nudibranch, which has migrated from the Suez canal, an exotic species that is not native to the Mediterranean.
-It uses rhythmic lateral-bending movements, and can sometimes, travel long distances across open water. The upside-down, side-to-side thrashing motion may look awkward, but it is a complex series of movements which has been studied extensively.
-It feeds while attached to grasses, by extending its oral hood out and downward like a net. When the ventral surface of the hood contacts a small animal, the hood rapidly closes and the fringing tentacles overlap, holding in the prey then forcing the whole animal into the mouth. Prey include amphipods, copepods, mysids, other small crustaceans, small mollusks, small jellyfish and ctenophores, larvae of other invertebrates and in some cases small fish.


And one more picture from a wandering one at the surface. Probably she uses the current to move as she stays moveless just 1 meter under the surfave. (pic by hector) 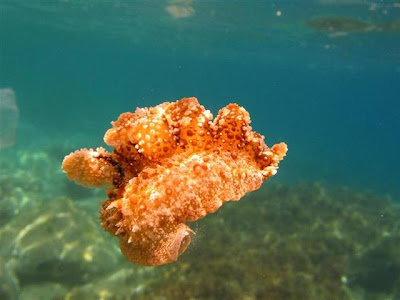 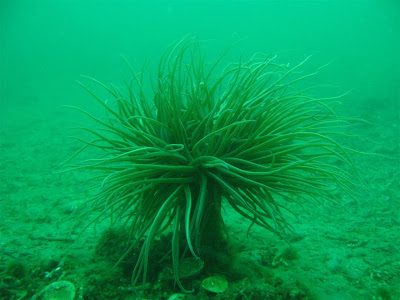 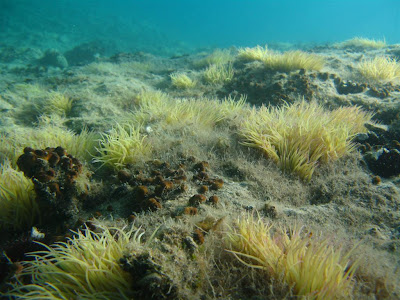 Living on her own or at big populations Anemonia viridis is one of the most common Mediterranean anthozoa species. It is the home for a big number of other species like crabs, fishes, shrimps even bacteria and algae. So she's is a real ecosystem on her own. The green fluorescent proteinis probably responsible for the ones with greenish colour. You should avoid touching her because as all the cnidarians may damage you with her stinging cells. If you want to meet the residents of this city stay in contact with medi-sea.blogspot.com .
by Hector Giourgis στις 00:57 No comments: 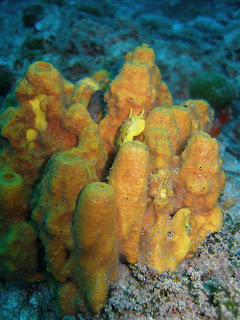 In two meters of water in Pilion, there is a great abundance of Aplysina aerophoba sponges, and most of them are big and beautiful, except some that have been eaten to bits.....by this beautiful little slug called Tylodina perversa.
You can see on the picture of the sponge the places that have not been munched, and the others that have a duller appearance. The marks that the slug leaves are very big, however the sponge heals easily.
This specimen was a loyal highlight to all divers there, until one day I pass by and look on every sponge but he was not there, the only thing left was its cap..Eaten but never forgotten!
by Elina Samara στις 00:13 1 comment: 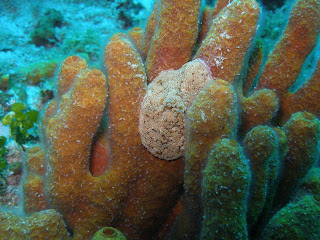 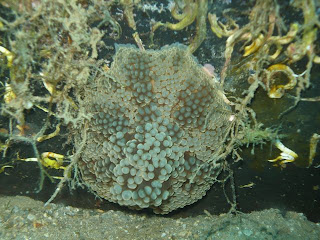 This amazing anemone, is so unlike any others!
In the day time it is as shown in the pictures, but at night it extends upwards
with elongated tentacles around it. We promise to post a night shot soon, or if anyone has one all ready and would like to
contribute, please do.
In the day time you can see it attached on anything, sponges, plastics (why are they there?), seaweed, anywhere.
All photos from Pilion, from 5-18m depth
by Elina Samara στις 00:36 No comments: 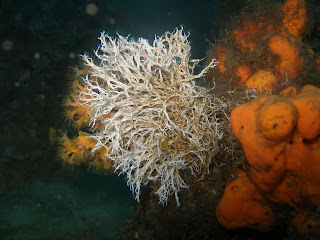 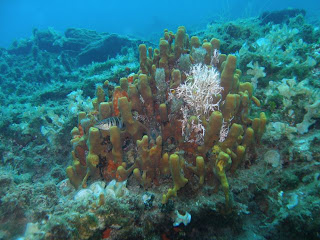 This little perch has a very impressive castle, made of a rich yellow sponge Aplysina aerophoba and a very fragile colony of coral worms Salmacina dysteri. The coral worms are only tiny but the colonies can reach up to 15 cm in sheltered areas, without nets or clumsy fin strokes.
Don't disturb the dreams and the castles, glide smoothly!
The photos where taken in Pilion, 5m.
by Elina Samara στις 14:13 No comments:

When there no jinx around!

Butterfly flying over me 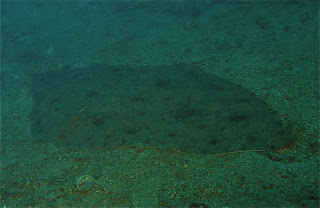 on a very cloudy day, the visibility was 5 meters max, and the prospects of the dive were grim..
that's when this beautiful ray flew by me and landed 5 meters below on the silty bottom.
It was 1 meter long from wing to wing.
The picture was taken at a depth of 35 meters, so along with the bad visibility and the photographers shock, it came out quite dark.
This Widewing butterfly ray can reach 2 meters wing span, it likes to feed on small fish and molluscs, along sandy or muddy bottoms. It is an ovoviviparous ray and the 4-7 embryos are born all ready equipped with two tail spines.The species has been reported as grunting loudly with the sudden explusion of air while lying on deck after capture :( This animal is so amazingly beautiful and suprisingly strong for its gracefulness, I hope all of you see it alive in the sea and never grunting out air on the surface as it struggles for its life...
This encounter happened in Pilion, at 33m
by Elina Samara στις 23:43 1 comment: