My one and only

2010 has been declared as the year of Biodiversity by the UN.
Hopefully this will actually mean something more than just a "fancy name " for this year.
Marine Biodiversity in the tropics is immense due to the thousands species of coral and
all the animals that are associated with them, that is well known. Here in snowy Greece
(and the rest of the Mediterranean) we have the one and only scleractinian coral that can
form reefs, Cladocora caespitosa.
We might only have one reef building species of coral here, but our seas are as spectacular
as the tropics, only sized down a little bit, but that does not matter! (Dive Greece Baby!) 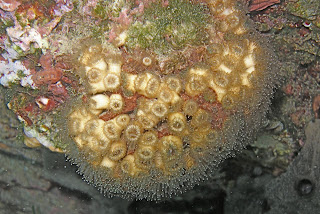 This amazing coral can form colonies up to 1m in diameter and one big colony was discovered
some years ago on a reef in Vourvourou, Chalkidiki(hope it's still there!)! As most corals, it is
composed of an external, calcareous skeleton which is secreted by the living organism contained
within it. The individual coral polyps(the little tentacles that are visible in the picture above) are
symbiotic with algal zooxanthellae, which photosynthesize to produce nutrients for its host.
The Cladocora coral reproduces sexually, releasing orange eggs and bundles of sperm before the
full moon in the summer months, in the Adriatic banks of this coral this happened in June.
The shape of the colonies depend on depth, light and currents.
It has a growth rate of a few mm per year, making it extremely slow growing.

Diving in Pilion last summer we were shocked to find massive coral structures completely
torn to bits at a depth of 40 meters. 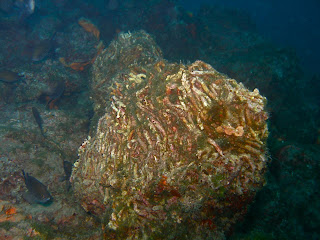 The first time I encountered these massive formations and they were all dead....
Vizualising these corals when they were alive and the life they contained within and around them
is wondrous, but for the sake of biodiversity and for a healthy ecosystem...
I hope this year we permit our one and only reef building coral to grow.
by Elina Samara στις 07:35 No comments: 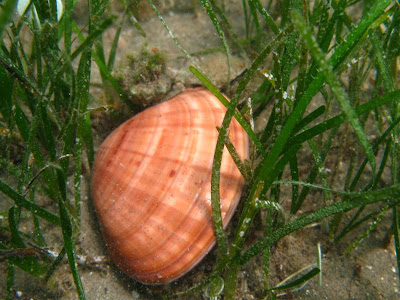 One of the most popular bivalves of the Mediterranean sea is Callista chione. This shell is a small scale fisheries target because of its nice flavor. Also octopus and gastropods admire its flavor as you can see on an older post (10/11/2009). After being eaten the shell usually becomes an ornament for flowerpots, walls and lamps. You may know from trees and fishes that the period of time that the animal or plant has slow growth rate is printed on the body of the fish or the trunk of the tree. Something similar happens with those dark thin stripes on the valves of the C.chione shell. Also the slow growth period is from July to October in reverse with trees and fishes that this period is usually the winter. The reproduction cycle starts after the second year and lasts for about one year! Also an adult can live up to 17 year. The species of the photograph should be about 4 years old and has unburied itself, because it usually lives inside the sand. In Greece we call this shell ‘gialisteri’ ( Γυαλιστερή) and this means shiny one. 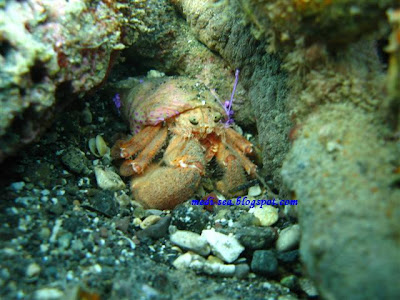 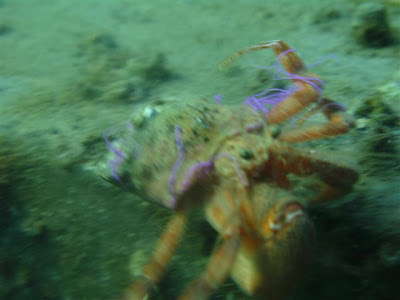 In an older post we talked about the association of Dardanus sp. with the anemone C.parasitica. Now I will describe to you the most admirable symbiosis relationship of the Mediterranean, between crabs and anthozoa. Pagurus prideaux is a hermit crab that can grow up to 6cm and lives usually on the sandy parts of cave entrances. Unlike their great population in the Norwegian coast of the Mediterranean you cannot meet them too often here. When they are young they start to have a symbiotic relationship with the Adamsia carciniopados anemone. Because P.prideaux doesn’t feel very comfortable inside the gastropod shell, they prefer to live with “something like a shell” which the anemone helps to build. That way it doesn’t need to change its shell throughout his lifetime, as the shell grows bigger, along with the crab and the anemone. The anemone covers all the sensitive parts of the crab and the tiny shell like a cloak. The anemone is responsible for her buddies defence. For that purpose when they are in danger the anemone produces a lot of bright pink tentacles with stinging cells. These tentacles are called “acontia” (Second photo “where these animals are frightened the crab runs as the anemone spreads its stinking defence). The most noticeable thing in this relationship is the feeding behaviour. The crab feeds the anemone by putting pieces of food near the anemones mouth! It is possible, even after a few hours, the crab pulls the food out of the anemone’s stomach and eats it.
by Hector Giourgis στις 12:30 No comments:

Thorny outside, soft inside! 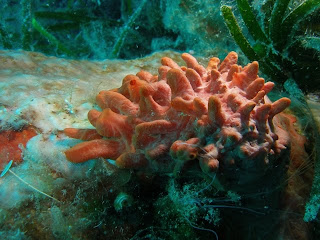 Dear friends of Medi sea, it is my honour today to introduce to you the Mediterranean's true oyster, Spondylus gaederopus, or as the species name suggests - donkeyfoot (gaederopus).
The thorny oyster can become quite large (15cm height) and is mostly always attached on vertical rocks, however I have found one specimen in the sand,attached on a pebble! and the first photograph is a specimen photographed on a very old bivalve shell Pinna nobilis.
This magnificent shell, is mostly found covered by a red sponge (Crambe crambe)and other organisms, so it is well camouflaged for the untrained eye.
The key characteristic of these shells is that their two valves are hinged together by a ball and a socket type hinge, instead of a tooth hinge as is more common in other bivalves. they range from 1 to 50 m depth and can be found out until the Cape Verde Islands. 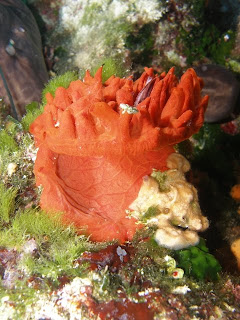 The photograph above displays a dead oyster, where the sponge has spread inside and outside the valves!
These shells are very good to eat raw, they are treated as a delicacy, and thus their other common name in Greece, the Royal Oyster! However, let me remind you that this shell is a filter feeder, meaning it sieves everything that is in the water,
so, in neolithic Europe, when these were often used for bangles and ornaments, and food as long as 5000 years ago, the seas where pure, crystal clean!No technological revolution, meant anything you ate was safe, nowadays the sea can be a dangerous source of toxins, so keep that in mind before munching on too many.. (Shells of this species have been found in Kastoria-Dispilio (mainland Greece) inside the remnants of the lake city!)

Also, special care must be taken when consuming this oyster in restaurants, if you don't know what a fresh oyster looks like, don't consume, they can be dangerous.
by Elina Samara στις 10:23 1 comment: 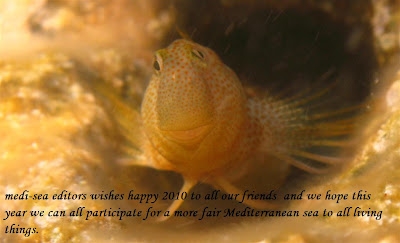 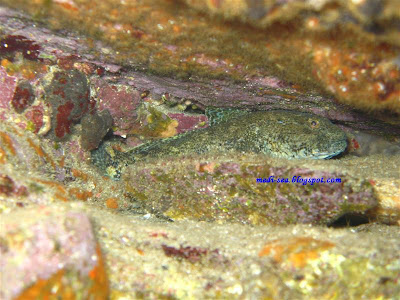 Gobius cobitis is the biggest fish of the about 20 species of the family Gobiidae in the Mediterranean sea. That’s why I chose him for doing the first step of our blog for the New Year. I read on internet that it is considered as a protected animal in G.Britain but I think that this is a little bit strange. I met him as his was doing his midday walk away from his rocks. I don’t know if he was hunting anything because his feeding is very variable between green algae, crustaceans, insects and polychaeta. He lives in the intertidal and very shallow water between rocks and hides in small caves if any annoying photographer disturbs his silence ;-). His large size (up to 27 cm) sometimes fools naturalists as they believe that it is a small grouper or whatever else they think. Fishbase calls him chondrogovios (χοντρογωβίος) which is a name I have never heard and means fat-goby. A fisherman was calling this fish Petrakis (Πετράκης) and I find it much more gentle but I am not sure if this can be considered as a local name.
by Hector Giourgis στις 17:15 No comments: