Strangers with the strangest eyes.

In an older post we talked about C.Mediterraneus and how lonely it feels in our seas, because none of the 400 members of its family live in our neighborhood. In our fantasy, we can imagine that a similar (it actually only looks similar) species heard its sad story and visited him to live in the neighborhood with big opportunities for the marine animals. It is called Strombus persicus and comes at Medisea from the east as an immigrant. It is also the only member of its family in the region (a second species may have beem possibly established, the Strombus mutabilis). 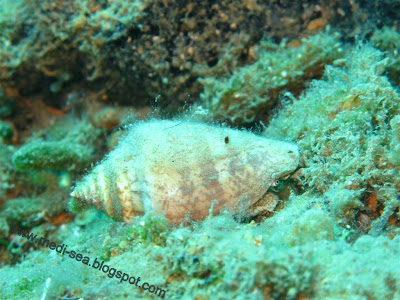 Strombus sp. are strange gastropods with big human-like eyes. When you see it you think that you are looking at something different than a snail. Maybe a cursed mermaid, who knows? Except from its strange eyes it has an unexpected way of moving. Its operculum is sickle-shaped and hooks to the bottom helping the snail to move. The movement looks like little jumps and it’s very different from the sliding movement of the other snails. For its bad luck it is not able to dig with the strange operculum. If it digs it can find fossils of a famous big snail that lived at the Mediterranean Sea before thousands of years called Strombus bubonius.
Info about the superfamily Stromboidea you can find on this site!!! 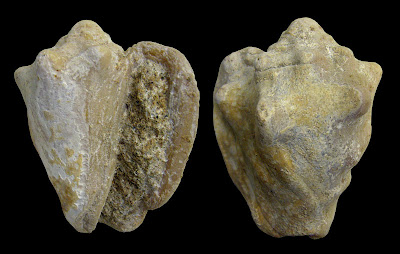 Volcanoes, roses and a prince. 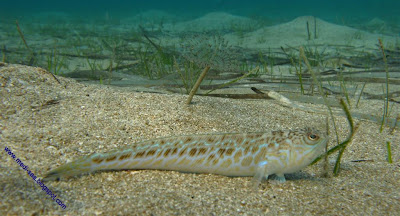 On little Santa Maria beach,Paros, if you swim at the depth of 4-5 meters and deeper, on the sandy parts you may notice a lot of small hills with a hole in the top. These “volcanoes” are nests of marine animals. Bivalves or worms are the most possible inhabitants of the volcanoes but until now I didn’t have the chance to check it. When the volcano is dirty,it has the same behavior with all the volcanoes. It explodes and you can notice small stones throwing away from the hole.
Of course, and as in every lonely planet, except from the volcanoes you can also see roses. The roses of the area are alive and have a worm inside them. They are spiral tube worms but for we will talk more about them in future posts. So the volcano is dirty and the rose alone? Of course not! Our planet has its capricious prince, the little weever. It is capricious because if you annoy him it will give you his poison. (stop the pain by putting the injured area in hot water 44C to 49C). It spends its day by laying over the volcano and negotiating the terms of volcano cleanliness with the worm, trying to help the rose with the existential thoughts. That's how our friends spend their day on the sandy beach. 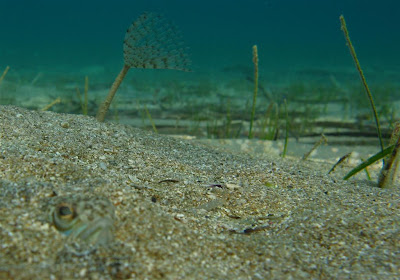 When the roses ideas make our hero tired, he prefers to bury himself instead of going away. 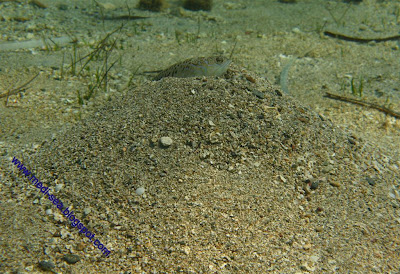 The volcano is such a good place for scanning around and resting. 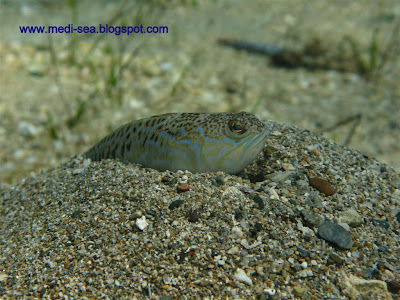 The hard thing is to convince the worm to let you clean the volcano. 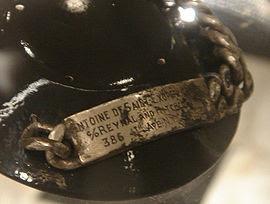 by Hector Giourgis στις 09:25 No comments:

Close Encounters of the Third Kind

When I went to Athens on late of June, I met my father who showed me some pics of the strange fish that live under his boat. It was a pic from the anchoring rope of the boat where you could see three shadows standing by the side of the rope. Exactly in the same place (in the same rope) and before 2 years I had first met the Cornetfishes that live at Mediterranean sea. I met them as we were coming back from a dive with Elina, and as we were getting out of the boat I spotted the same shadows from my fathers pics. Fast and cautiously (because it was illegal to dive there as there where running construction works) I slid into water for two minutes to take these pictures. In the pics you can see one of the small cornetfish from that contact. It has a very strange tail with a membrane being in the place of the whiplash that usually exists at the end of the cornetfish tail.
My last contact with the invading alien "ehmm sorry fish" ,was before one week during a wonderful night dive. I spoted a big fat cornetfish (I think it was bigger than 1 meter) by some Poseidonia plants, at the depth of 15m. I don’t know why the fish was extremely friendly towards us. Maybe it was tempted by our wonderful character, but I mostly believe that our powerful lights helped also. It changed its color (when it was alone it was striped) to a bright green-blue and started moving between us and hitting our masks with its mouth! I petted it and took some nice pics before we let it continue to its hunting for little gobies and other small fishes. I have to remind you that the Fistularia commersionii is one of the species that invaded the Mediterranean sea through the Suez channel. In the picture you can see Linda petting the fish. Linda has her birthday today and she draws fishes while she is studying biology and diving. So Happy birthday buddy and hope you soon reach thousands of dives and have close encounters with all the lovely marine animals. 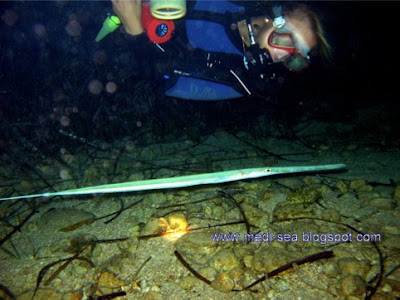 by Hector Giourgis στις 11:53 No comments: