Tropical colors beneath the Big Blue! 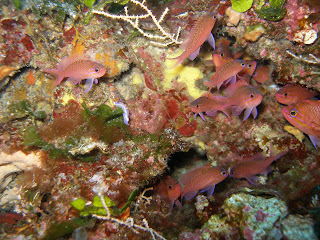 Underwater Greece reminds me of Underwater Caribbean scenes, breathtaking beauty, colors and vibrant life emanating from magnificent rock reefs that appear out of the depths. Here we see a characteristic school of Anthias anthias fish,which although hard to believe, are members of the grouper family (Serranidae). This relatively large, diverse family contains some of the largest of all the bony fishes, as well as some true Lilliputians. The anthias belong to the subfamily Anthiinae. Most of the members of this subgroup are small, colorful reef-dwellers that form groups or shoals over the reef where they capture minute food items carried by ocean currents. The subfamily includes 17 genera and approximately 170 species. In the Eastern Mediterranean, the only representative, Anthias anthias decorates reefs and pinnacles between the depth of 20 - 200 m and prefer to feed on crustaceans and small fish. They are typical serranid fishes in that they are protogynous, born as females and switch to a male mode of existence later on in life!
Within the anthias shoal, territorial males perform acrobatic U-swim displays and vigorously defend an area of the reef and an associated harem of females. Within the group of females, a dominance hierarchy exists, with larger individuals dominating smaller conspecifics. If the territorial male should die , the dominant female in the harem changes sex (they are protogynous hermaphrodites) in as little as two weeks and will become the new territory holder. To maintain dominance, males and larger females display at, charge, chase and sometimes nip at their neighbors. Sexual dimorphism is evident with the males having yellow tips on the third dorsal spine and pelvic fins. 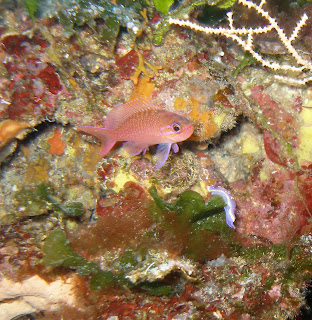 Looking closer in the frame (cropped from above photo) you will notice a spectacular Chromodoris luteorosea nudibranch being thoroughly investigated by the curious female Anthias. I had never seen this nudi in Greece before, and was very happy to encounter it unexpectedly! Its distribution reaches the Med and the Atlantic, and as most nudis it is a voracious predator.
This photo was taken during marine surveys in Kalamitsi and very soon to come, a big suprise from the depths of Pelion, while diving with Pelion Diving School.