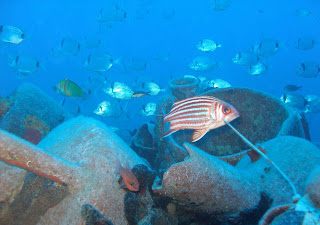 The Red Coat Soldierfish arrived via the Suez Canal, becoming a very common fish in the southeastern but also southwestern Mediterranean, and is the only species of the family Holocentridae that has moved to our seas until now.
This specimen was photographed off the South Coast of Cyprus, over a 4th century BC wreck, which was carrying the most precious wine of the time, from Chios.
The archaeological excavation of the wreck was conducted by the University of Cyprus, in collaboration with the Department of Antiquities of Cyprus and the THETIS Foundation.
This photo was taken at a depth of 45 meters during the expedition in May 2010.
In Greece its distribution is in the most southeastern parts, like in Kastelorizo, where the population is very active.
A survey conducted on an artificial reef of the coast of Israel found its biomass to have increased from 64% in 1985 to 95% in 1995 (E Spanier, Changes in the Icthyofauna of an Artificial Reef in the southeastern Mediterranean in one Decade, Scientia marina, 64 (3) 279-284). The author speculates that this dramatic increase in Israel and other neighboring sites, is either due to the competitive exclusion of autochthonous species by Lessepsian migrants, taking over spatial and food resources, or another possible explanation could be the over-fishing of the targeted, commercially important, groupers and sparids.
The wreck of Mazotos, off the coast of Cyprus, is definitely acting as an artificial reef amongst the vast sandy plains of the sea bottom, but, thankfully, due to its protection as an archaeological site, it is not fished very often, with the exception of rogue fishermen/looters
This beautiful fish cannot be mixed up with any other in the South Mediterranean, well until any more decide to change oceans! Its skin is very rough with hard scales, and the spine on its cheek is venomous, so look, but never touch
It is usually found in coastal reefs, wrecks, caves or cracks of rocks and very often occurs in aggregations.
They feast on benthic crabs and shrimps but even small fishes
by Elina Samara στις 02:23 9 comments:

I'm sticking with you 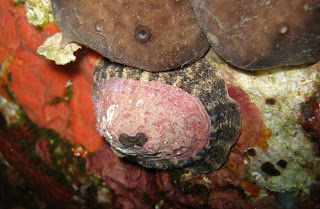 Limpets are gastropod shells but they do not have the typical gastropod shell shape, as can be seen in the picture. The common hey hole limpet can reach 40 mm long and can be found in the Mediterranean sea, but no longer in the North Sea, any specimens in the south eastern part of the North sea that are washed out are thought to be fossils. When viewed from above, Diodora graeca, is oval shaped with radiating ribs and bold growth lines. The color varies from creamy to yellow white often with brown, radiating rays. The hole on the top of the shell serves as an outlet for water and waste products. It can be found in deep water up to 200 meters, but this specimen was photographed in Platanitsi at a depth of 10 m. Just like other limpets it adheres firmly on the sides of rocks, making it very hard to detach, unless you use a knife...but why would you do that to such a beautiful, docile creature. This family is mostly herbivorous but the key hole limpet likes to feed on certain species of sponge, especially Halichondria and Hymeniacidon.
And as the Velvet Underground song goes.....I'm sticking with you....coz' I'm made out of glue!
by Elina Samara στις 10:29 No comments: