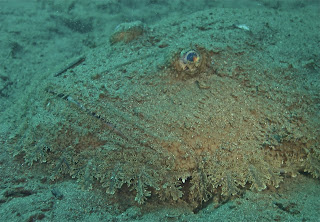 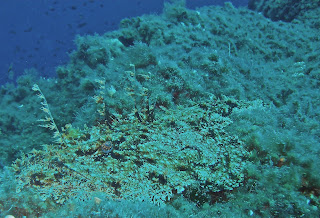 The biodiversity of fish shapes and forms reminds me of the
immense shapes and forms found in the rain-forest insects!
This month we offer for your viewing and icthyological pleasure
the magnificent Angler fish or Peskandritsa in Greek.
Another synomym is the Monk fish, with the females of the species
reaching the spectacular length of 2m, 40 kg!
To encounter even a small specimen is a fantastic experience,
firstly because of its mouth, which basically makes up most of
the body! The angler fish gets its name from a small fishing appendage
found on the top of the head, which originates
from one of the three modified dorsal spines.This fishing lure
attracts mostly small fish, however the angler fish with its
massive mouth can engulf fish as big as itself, and digest them easily in its expandable stomach! On the first photo we can clearly see the seaweed like
appendages, circling the mouth which can change color depending on the
environment, making this fish another master in camouflage, whether it is
lying on sand or rocky bottoms.
Another strange aspect of this animal is the use of its modified pelvic and pectoral fins as legs, which it uses to move around, along with a sudden burst of its tail.
On this video provided by our good friend Michalis, you can see this behavior on minute 2. The monk fish is highly commercial, however its status is not evalluated yet for the IUCN red list. It is always sold skinned and without a head, so basically
what you eat is the tail... not a lot from such a big fish, so it is best left alone
lurking on the sea bottom, fishing other small fish or even sea birds!