Is it a Nudibranch? Is it a sea slug? No! It's a mesogastropod! 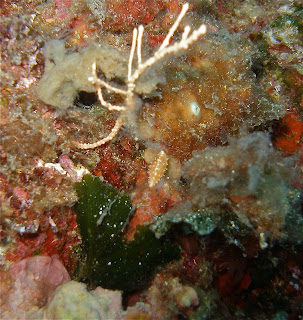 Right in the center of this photo you can see an ovular animal of beige/white colour. It is very small, up to 15mm and is most usually found on gorgonians Eunicella and Paramuricea spp. It's color depends on the color of the animal it is found on, from yellow to red or beige. However, the color changes on the mantle of the snail, the hard shell always remains a brilliant, glowing white. When Neosimnia picta is threatened, it retracts its mantle inside, exposing the outside shell (here visible as the white descending line in the middle of the animal). This mesogastropod is quite elusive, probably using pigments of the host gorgonian to change the color of the mantle, making it merge completely into the background. This photo is quite rare in that the snail was found on the substrate and not on the gorgonian! For its size, moving from one gorgonian to the other can be a long migration, but don't worry! It can move with surprising speed and reaches as far as 80 m! This animal was found on 35 meters in Kalamitsi, Chalkidiki.
by Elina Samara στις 23:53 1 comment: