“We're all familiar with birds that are as comfortable diving as they are flying but only one family of fish has made the reverse journey” inform us “The Journal of Experimental Biology”. Reading more about an experiment done at Seoul answers all the questions that query us when we first watched the flyingfish’s flight over the sea. At the work of two scientists of Seoul National University ,that made the aerodynamic experiments, we can read all that interesting things.
"For the first time, we have performed a direct wind-tunnel experiment to investigate the aerodynamic properties of flying-fish flight and provided qualitative and quantitative data for the flying fish flight. Force measurements were performed for the real flyingfish models with different wing morphologies. The aerodynamic performance of flying fish is comparable to those of various bird wings, and the flying fish has some morphological characteristics in common with the aerodynamically designed modern aircrafts. As the lateral dihedral angle of the pectoral fins decreases, the lift coefficient slightly increases. In addition to the enlarged pectoral fins, the large pelvic fins have an important role in enhancing the lift-to-drag ratio and longitudinal static stability. The enhancement of the lift-to-drag ratio from the pelvic fin is attributed to the jet-like flow existing between the pectoral and pelvic fins. For both solid and water surfaces, the drag coefficient decreases and thus the lift-to-drag ratio increases as a result of the ground effect, indicating that the flying fish obtains substantial advantages by gliding close to the sea surface." 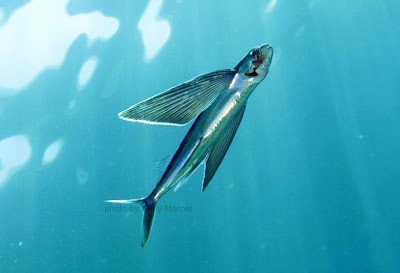 Nelly didn’t expect such a rare meeting while she was ascending from a dive at Kardamili region at Southern Greece. Usually she met jellyfishes or schools of small fishes in similar situations. Suddenly she thought that a bird splashed down over her bubbles trying to catch one small fish that moved carefree near her surface. Watching better she thought that the world had turned upside down (like at the POC 3 movie) and the birds come underwater! Ohhh look that fish it has enormous fins that look like wings tried to say at her buddy who swam nearby her. She realized that she was watching a flying fish, a fish that she had first met while fishing with her grandfather when she was child. Fastly she took some very nice pictures and later shared them at the social network. There I saw the pictures and that make me excited because it was the first time that I saw a u/w picture of a flyingfish. That fishes rarely come near the shore to make company at divers as they prefer the open sea. I find it hard enough to descry which specie it is because at Greece there are several similar species of flyingfish. I think it’s the Cheilopogon heterurus but as far as I search I cannot be sure. Thank you Nelly for sending us that pic!
by Hector Giourgis στις 16:53