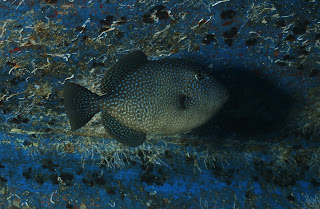 Photo by Vasilis Mentogiannis
After all these years of diving, travelling and exploring the seas of the world, this was the year I said with the most certainty that even if I only dive here,in Greece, for the rest of my life and nowhere else, I will be happy and content!
Dive Greece Baby!
The beauty of our sea is not only very well hidden and currently very fragile but also it is very little acknowledged. One example, is a completely exotic animal the Triggerfish, which usually lives in tropical seas. The Grey triggerfish (Γουρονόψαρο η Βαλιστής) is a resident of the East and West Atlantic, all the way down to Argentina with rarer occurrences in the East Mediterranean.

Balistidae is a family containing 40 species but only Balistes carolinensis (synonym Ballistes capriscus)can be found in Greece. As a family, these fish are most extraordinary, with colorful lines and spots, especially in their Indopacific range. Their name, triggerfish, comes from the locking mechanism of their anterior dorsal fin, which is composed of 3 spines that fit inside a groove, while only 2 work as a trigger. When the first, (anterior) spine is locked in place by erection of the short second spine, then it can only be unlocked by depressing the second, “trigger” spine.

Another peculiarity of the triggerfish, is their aggressive behavior against other fish in small aquaria, or divers when they approach a nest of eggs. At this point, it is advisable to swim away from the nest and not over it, as their territory is conical reaching to the surface. If you add the aggressive behavior of these fish, along with their strong, fused teeth, you have one vicious, unnecessary bite! Some strong attacks have been mentioned from bigger, more tropical species, but for the Grey triggerfish this has not been reported.
Balistes carolinensis prefer to eat small crustaceans and mollusks from the benthos. Their skin is very tough and leathery.
It seems that this particular individual is a juvenile, because the tips of its caudal fin are not elongated yet। As an adult it can reach the size of 60cm! Their reproductive season is in the summer, when spawn is placed inside a crater on the sand, and is guarded by the female (male in the tropics), a sure sign you should swim around and not over the nest!
The color of the Grey triggerfish is mostly grey with brilliant fluorescent turquoise dots on upper half of body and median fins, and irregular short lines ventrally. There may also be three faint irregular broad dark bars on body and a narrow pale transverse band on the chin.

This particular beauty was hanging out under the traditional fishing boat (kaiki) Agios Nikolaos, the boat that broke the embargo to Gaza in the summer of 2008 http://www.youtube.com/watch?v=8gRscVeNbDo&feature=related.
The second expedition took place this year with tragic consequences.... 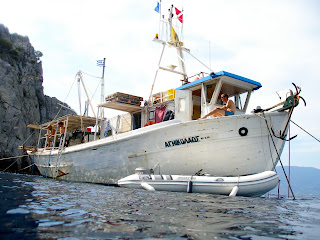 The boat was anchored next to the Isle of Modi in the NE Peloponnese, but that is a whole different adventure soon to come on Medi Sea!
Until then, thank you Vasilis for capturing the elusive fish!
by Elina Samara στις 14:03