A lower-higher level of the food chain!!! 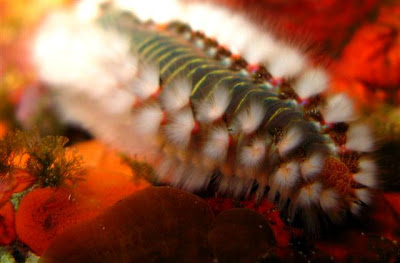 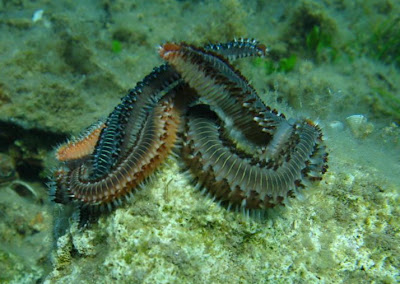 The fire worm is really a charismatic marine species! People may admire a lot of animals like the powerful sharks and marlins and condemn other animals like the worms because they seem to be so weak. Fire worms are not weak; one of the first things that I learnt when I started fishing with hooks at my childhood is not to leave the bait move for a long time. If you do so, fireworks will get it and you don't want to have any contact with those worms. I was lucky enough and this animal never harmed me (this is really strange!!!) but as it is known it has thousands of hard bristles that if they touch your skin you will feel a burning sensation for many days. That's why no marine animals ever eat a fire worm. On the other hand fire worms eat almost everything, even sea anemones. They are also the most successful scavengers in a lot of areas. For scavenging it is believed that they use the organ they have on their head. It is believed that it's something that helps for good smell. (the one that looks like a brain at the first photo). You can find hundreds of them over a dead fish body, just ten minutes after you throw it in the sea. At the second photo you can see a lesson in knots!!!!
by Hector Giourgis στις 13:13